Let’s jump back into our series on Psalm 23.

Last week, we looked at the first part of verse 4 which says:

“Even though I walk through the valley of the shadow of death,
I will fear no evil,
for you are with me;
your rod and your staff,
they comfort me.” (Psalm 23:4 ESV)

Since we stopped at the phrase “for you are with me,” let’s pick things back up with the last two lines.

Weapons of Mass Comfort
A wise shepherd would almost always have had a rod and/or staff with him while out in the fields with his flock. While I suspect a shepherd would have used his staff as a walking stick, that wasn’t its primary purpose. One purpose for these tools was to get a particularly stubborn sheep to move. But another major purpose for these pieces of wood were as weapons to fend off predators.

If you are into hunting or martial arts, the idea of weapons probably doesn’t bother you. In fact, they might excite you! But let me remind you, these weapons are in the hands of the shepherd, not the sheep. In other words, these weapons are for your Shepherd to wield, not you.

But perhaps you are on the other side of the spectrum and are uncomfortable around guns or knives. You turn the channel when an MMA fight appears on your TV screen. So to hear that God wields weapons makes you uncomfortable. You aren’t alone. Many people in our culture don’t like to think about God’s wrath.

But imagine a mother watching a strange man walk up to her child and swing his arm back as though to smack the toddler. Would you expect the mom to passively observe this abuser hurting her child? Or would you expect “mama bear” to jump into action?

Like a mother toward her child, God the Good Shepherd passionately and fiercely loves his sheep. So when the lions of life come to attack, God the Protector jumps into action, using His “rod and staff” to protect the sheep.

So when a lamb looks up at the Shepherd and sees weapons in His hands, the sheep doesn’t quake in fear and run away. Rather, it takes great comfort, knowing that if a predator comes his way, it will be run off by the rod and staff of his Shepherd. 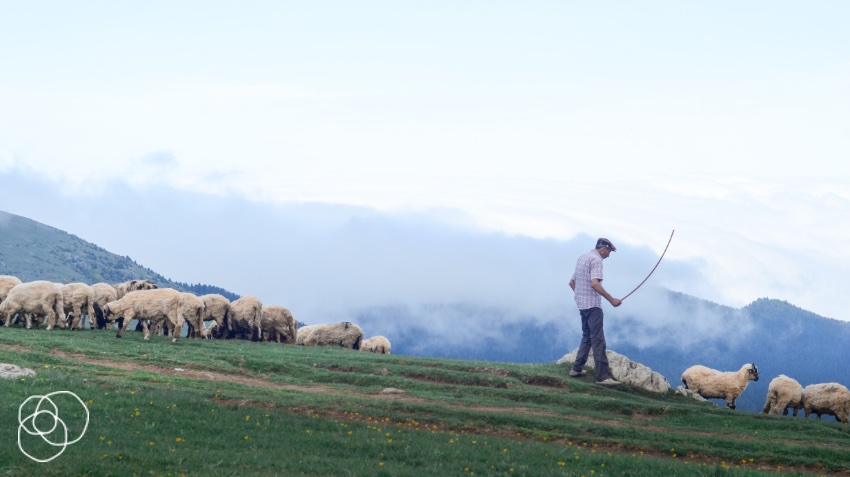 Now, let me acknowledge there is great evil in our world. There are monsters who sexually prey upon children. There are liars who cheat people out of their hard-earned money. There are people who cruelly discriminate because of skin color, education level, gender, or more. Because of sin, horrible acts have been committed against other humans. If you have had horrendous evil done to you, I am truly sorry.

But just because great harm may have been done to you emotionally, physically, or spiritually, doesn’t mean God was absent, unaware, or too slow. Just because the wolf got in a swipe on the sheep doesn’t mean the shepherd was away running an errand or just didn’t care. Most likely, the shepherd was yelling at the wolf and on his way before the sheep ever realized what was happening. Just look at the life of King David.

If you are unfamiliar with David’s story (the guy who wrote Psalm 23), you need to know that at one time in his life, he had a tyrannical king named Saul trying to take his life. Saul knew God had chosen David to replace him, so Saul sought to stop God’s plan and kill David himself. In his fear and running, David cried out to God like you and I would, yelling “God, where are you?!” (See the previous psalm, Psalm 22, for an example.)

And yet, David knew that even when facing evil on this earth, his God was still a Good Shepherd. He trusted that in the ultimate end, justice would be served by God. And that hope brought David comfort.

If you have been hurt or abused or shunned, I am SO sorry for what you have faced. But may you take comfort in the knowledge that God isn’t done. His “rod and staff” will bring ultimate justice and protection, whether in this life or the next. May you trust your Shepherd and know that his fierce love for you has already brought wrath against the sin of our world through the cross and will be completed at the end of all things. May you take comfort in the perfect violence of God.