19 Where is the way to the dwelling of light,
and where is the place of darkness,
20 that you may take it to its territory
and that you may discern the paths to its home?
21 You know, for you were born then,
and the number of your days is great!
(Job 38:19-20 ESV)

During our little trip through the first half of Job 38, we’ve seen God get a bit sarcastic with Job. But in case you haven’t noticed the sarcasm previously, or just don’t want to admit God would mock someone, verse 21 basically obliterates your attempts to make God sound like a heavenly Tellytubby. I used the English Standard Version (ESV) above, but go ahead and look at whatever translation you want: God is sarcastically mocking Job. Why? Because He wants Job to fully appreciate just how different Job and God really are.

And what is the primary difference God points out to Job in these three verses? That Job is limited, but God is not.

First, we see Job was limited to earth. He had no idea “the way to the dwelling of light or the place of darkness.”

Second, Job was limited in power. He couldn’t pick up the darkness and carry it to it’s home.

And third, Job was limited in time. God sarcastically points out that Job has not had nearly the same length of time in the universe God has.

This is why (as we’ve already seen in this series) that God points out Isaiah 55:8 that His ways are not like our ways and His thoughts are no where close to being like our thoughts. Our ways and thoughts are like Job – limited. But God does not possess the same limits we do. As we’ve been seeing through this entire series, God is not limited in His wisdom, understanding, power, and existence.

And so we may not know…

…because we are limited. But we can know that God is limitless, and out of His limitlessness, He can carry us and give us peace in the midst of these uncertain days.

16 Have you entered into the springs of the sea,
or walked in the recesses of the deep?
17 Have the gates of death been revealed to you,
or have you seen the gates of deep darkness?
18 Have you comprehended the expanse of the earth?
Declare, if you know all this.
(Job 38:16-18 ESV)

If You Could See What I See

God sounds like He’s copping a bit of an attitude here, getting a bit feisty with Job, mocking him for not being as great as He is. But God isn’t mocking Job – rather He’s giving Job perspective.

Longtime Baltimore Orioles baseball manager, Earl Weaver, had a rule that a player couldn’t steal a base unless given the sign to steal. All-Star Reggie Jackson felt this was unfair as he felt like he knew most of the pitchers and catchers of opposing teams and knew who he could and could not steal on. So after getting a single, Jackson decided to steal second even though he wasn’t given the sign. He easily took second, flashing a big grin to the dugout as if to say, “See, I know what I am doing!”

But after the game, Weaver pulled Jackson aside and explained why Jackson shouldn’t have stolen second. Because batting behind Jackson was one of Baltimore’s power hitters. But by Jackson taking second, first base was left open. As a result, the opposing pitcher intentionally walked the power hitter because the next batter was in a slump. The pitcher was hoping to induce a double play to end the inning. So as not to waste two men on base, Weaver felt forced to put in a pinch hitter for the batter in the slump, thus reducing the players available for later in the game.

When Reggie Jackson stole second, he had only been thinking about himself. He wasn’t thinking like a manager who was thinking about the entire game. Earl Weaver brought years of experience to the game, and with that experience came knowledge and perspective that Jackson lacked.

Like Jackson, so often all we can see is our current situation. Right now, many of us…

And because we only see what is right before us, we get frustrated, and that frustration leads to an absence of peace.

But if we realize through Job 38:16-18 that God not only sees the depths of the sea, knows the gates of death, and can comprehend the expanse of the earth, but can also see eternity past and eternity future, it means He possesses the knowledge and perspective of what life will look like tomorrow.And so may you rest in the truth that God possesses the knowledge of what is next, and because He has a greater perspective than us, He knows how He will carry you through these days into the next chapter.

So trust Him, resting in His unfathomable knowledge.

In this series, we are looking at the topic of peace through God’s self-descriptions in Job 38.

12 Have you commanded the morning since your days began,
and caused the dawn to know its place,
13 that it might take hold of the skirts of the earth,
and the wicked be shaken out of it?
Job 38:12-13 ESV

More Reliable than a Sunrise

Last week, I mentioned the 2004 Indian Ocean tsunami, the deadliest tsunami on record. How deadly? Over 200,000 people died among 14 different countries.

I remember shortly after the tsunami having a conversation with a young adult who was struggling with his faith, and the tsunami was wrecking his faith even further. “How could a good God allow something like that?!?!” was the angry question rattling around his brain and tumbling out of his lips. 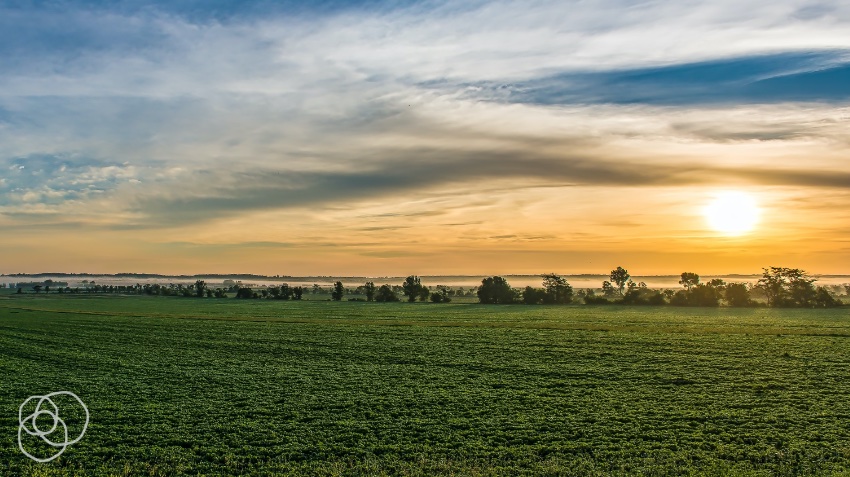 Tsunamis, tornados, hurricanes, and droughts can be awful. Yet, you are far more likely to experience a sunrise than a devastating geological event. An earthquake is an every-once-in-a-while type event. Yet like clockwork, everyday the sun comes up in the east, travels across the sky, and settles in the west in the evening.

As you saw in verses 12 & 13 of Job 38, God takes credit for the daily sunrise and sunset. Since God created the earth and began its spin around its axis, God has consistently made sure the sun rises and sets each day for all of humanity.

I suspect you are a bit like me and are more prone to trust people who display consistency than people who are erratic. One of the definitions for the word integrity is “internal consistency.” God is full of integrity. He is consistent – far more consistent than any human could ever hope to be.

Because He is more reliable than even the sunrise, He can be trusted. And my hope is that this trust in God’s integrity will fill you with peace. Because you know the sun will still rise tomorrow, you can emotionally and spiritually rest. You can set aside your worry, knowing God’s consistency means He will still be on His heavenly throne when this pandemic has ended.

This week, I want to begin a new series here about finding peace. Living in a pandemic, I keep hearing about people who lack peace. In fact, on a Zoom call with a bunch of pastors recently, one admitted that this past week has brought a lot of anxiety to her, her church, and her community.

I think a lack of peace for a lot of people comes from a lack of control. Right now, we can’t control whether we or a loved one gets the coronavirus or not. We are trying to control the issue by staying at home, wearing masks, washing our hands, etc. And yet, the coronavirus seems to get closer every day.

And so I want to draw you to God’s Word to help you find peace. But I’m going to do it in a slightly different way. I want to remind you that even though you are not in control, God is. (I know, that’s not strange.) One place we see in Scripture where God reveals just how much control He has is the thirty-eighth chapter of Job. And Job 38 is a bit strange!

A Quick Recap of Job

But more important than the details about the book is what’s inside. The book of Job is the story of a really rich man (named Job) who had everything – a great marriage, tons of kids, lots of money, and the respect of his whole community. But like a sappy country song, Job loses everything (and I mean EVERYTHING) when God allows Satan to wreak havoc on Job’s life. Satan’s goal was to get Job to curse and reject God. But God knew Job’s heart.

All of this takes place in the first two chapters. From chapter 3 through 37, we hear Job go on an emotional roller coaster ride while enduring the bad advice and theologically inaccurate insights of some so-called “friends.” Then in chapter 38, God Himself shows up. And from the very first words we read from God, He exerts His authority. But He doesn’t just establish that He is God, He actually gets downright sarcastic and even seems to mock Job. (It’s quite the chapter.)

In our series over the next few weeks, what we are going to see in this unique chapter from the Bible is just how “awesome” God is. But here’s the thing: this “awesomeness” of God can actually bring a person fear. But within the fear-inducing words from God, we will actually find reminders that can bring us peace in the middle of a pandemic.

So here’s your assignment: Go read Job 38. Then buckle in with me next week as we working through this strange chapter of the Bible and find a deep peace through it.

If you’d like to have an even greater understanding of the book of Job, watch this video and/or this video.

P.S. Just want to keep reminding you that if you need someone to just talk with during this pandemic, don’t hesitate to reach out.